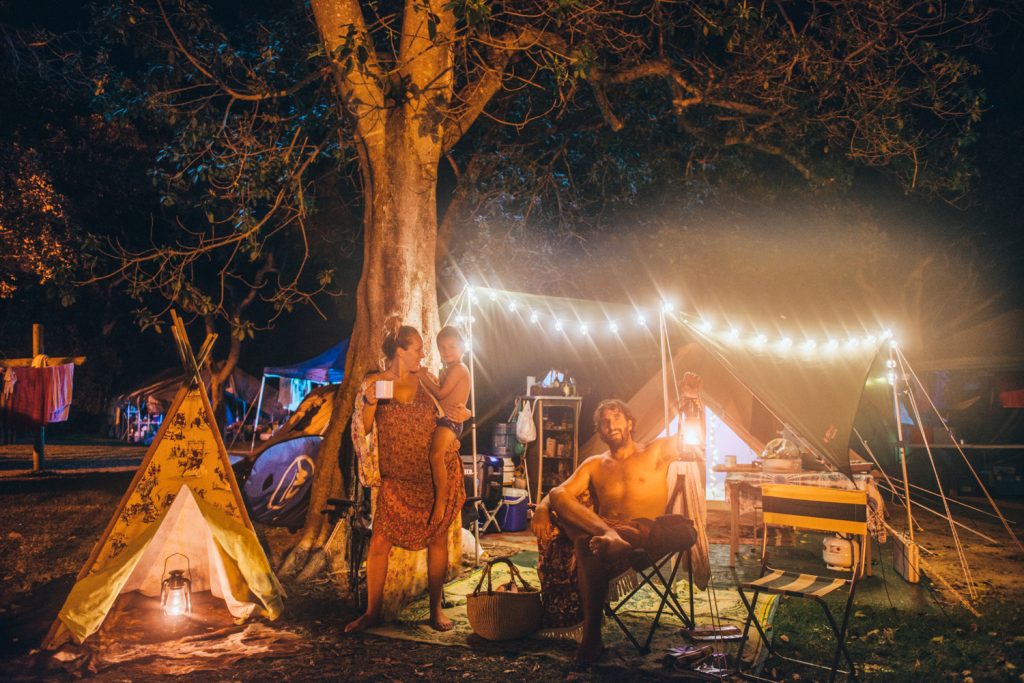 This was my first family camping trip since my parents took my sisters and I to the Howqua River in Victoria when we were little. So much has changed, and nothing has changed. On one hand, we now have cordless bluetooth speakers for music on the beach, but on the other hand it’s still Bob Dylan and Van Morrison being played, and the guitar still gets passed around the camp-chair circle.

I wanted to post this little travel diary of our camping mission up to North Stradbroke Island because I wanted to show you its not all glamping and bell-tents and OTT Spell spreads. (It’s very often baked beans on a campstove and kids muddy foot prints all over your blow up mattress – I mean, when you’re carrying all your belongings into a campsight you need to choose ease and practicality over aesthetics… BUT that’s not to say that your camp-sight has to be fucking ugly.

Because I haven’t been camping since the kids were born we had no gear whatsoever, and I just assumed we’d head off to your generically boring Tents’r’Us camping store and get some god-ugly tent and annex. But the day before we were set to hit Ballina’s only camping store a beautiful (and uber stylish) friend asked me “so, Lizzy, what do you want your campsight to look like?” and I was like “Ohhh! Hey wait a minute?! You’re right! What DO I want my campsight to look like???!!!” And of course when I started to drill down into it (see my Pinterest board here!) I realised there was no reason I couldn’t let the aesthetics of my professional life flow into the practicality of my camping life…

So I googled around until I found a Bell Tent I was happy with (in Oz check Breathe Bell Tents here) which was couriered to me within a few days, I found another stunning camping store and went a bit bloody nuts with my credit card… (coffee kit here!) Unfortunately, it didn’t make it to me in time before we left to go camping but can’t wait to take it with us next time! But the main thing that really helped make our camping trip that extra bit beautiful was making sure we had a fully stocked ‘lighting/ambience’ box.

I’ve listed a camping decisions that really helped turn our humble little campsite into a little pocket of home. As well as a few things I didn’t buy but are definitely top of my wish list:

A big thank you to our guest blogger Elizabeth Abegg